Buddhism was introduced to the Malays and also to the people of the Malay Archipelago as early as 200 BCE. Chinese written sources indicated that some 30 small Indianised states rose and fell in the Malay Peninsula. Malay-Buddhism began when Indian traders and priests traveling the maritime routes and brought with them Indian concepts of religion, government, and the arts. For many centuries the peoples of the region, especially the royal courts, synthesised Indian and indigenous ideas including Hinduism and Mahayana Buddhism and that shaped their political and cultural patterns. [1] However, the Malay Kedah Kingdom denounced Indian religion after the king of Chola from Tamil Nadu attacked them in the early 11th century. The king of Kedah, Phra Ong Mahawangsa, was the first Malay ruler to denounce the traditional Indian religion; he converted to Islam, and in the 15th century, during the golden age of the Malacca Sultanate, the majority of Malays converted to Islam.

Buddhism is the second largest religion in Malaysia, after Islam, with 19.2% of Malaysia’s population being Buddhist although some estimates put that figure up to 21.6% when combined with Chinese religions.[1] Many forms of Buddhism flourish in Malaysia.

According the Malaysian constitution, the majority ethnic group, the Malays, are legally defined as Muslim. They constitute 60% of the population, with the remainder consisting mostly of Chinese, who are generally Buddhists or Christians, and to the lesser extent Indians, who are generally Hindus. There are also smaller numbers of other indigenous and immigrants; among the latter are Malaysians of Sinhalese, Thai, and Eurasian origin. 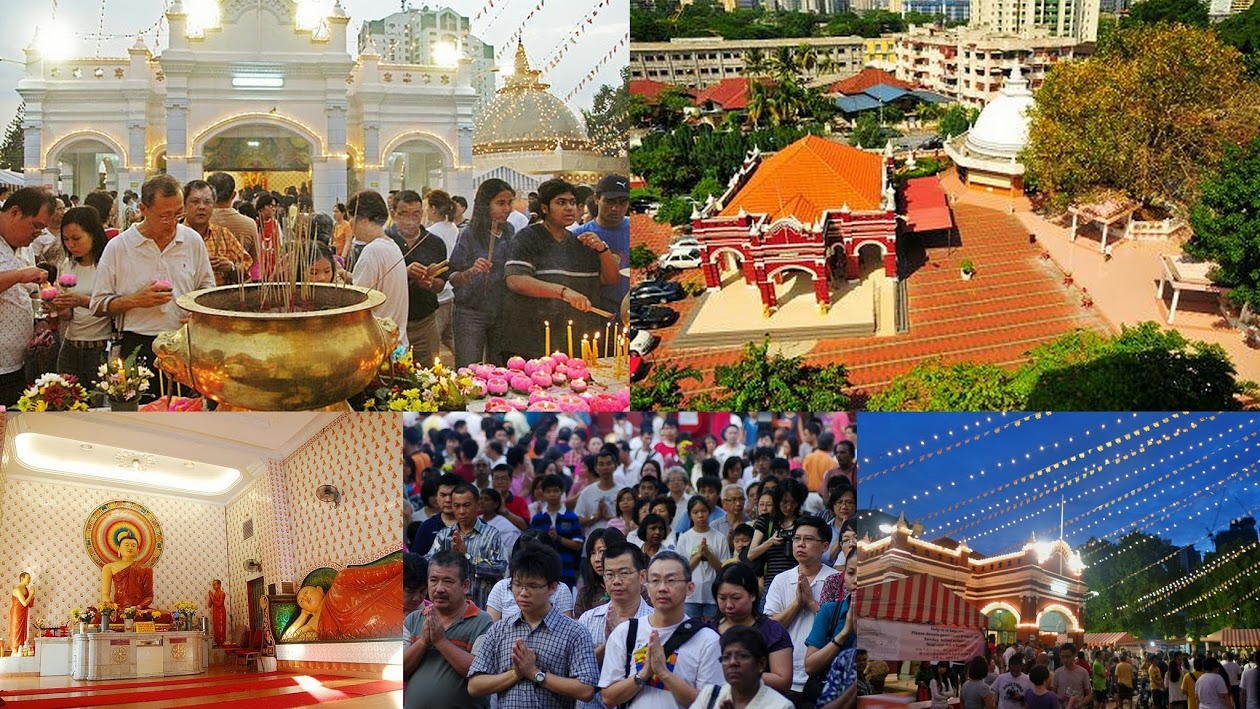 The Buddhist Maha Vihara (BMV) was founded in 1894 by the Sasana Abhiwurdhi Wardhana Society (SAWS), the oldest registered Buddhist Society in the Klang Valley.

The SAWS bears a unique distinction of being the 5th Society in the Registry of Societies, Selangor. The SAWS eventually became one of the 22 Societies and the only Buddhist Society that were exempted from registration of the Societies Regulation, 1894 of Selangor.

From its very inception till today, the Vihara has been managed by the Sinhala Buddhist community but always financially supported by the Chinese and Indian communities. The first structure of the Vihara was the Main Shrine room, completed in early 20th Century. The donors for the Shrine Room, as recorded in the Selangor Government Gazette 1896, pg. 408 are clearly the Chinese and Indian community and among the main donors were:

The Vihara was always the focal point to mobilize the Buddhists community. The large gathering to protest and stop the screening the then controversial film “Light of Asia” in 1927 in Malaysia was also held at the Vihara, and so was one of the mass gathering and signature campaigns in the 1960s to lobby the government to declare Wesak as a national holiday.

During the Emergency period of 1948-1960, monks from the Vihara made a massive impact reaching out to calm and educate the psychologically disoriented Chinese New Villagers who were evicted from their traditional lands and placed in new settlements by the Government who were fighting a communist insurgency.

Since the 1940s, the Vihara commenced a free Dhamma publications program as a Dhammadutta outreach to the masses which by the year 2012 is made available in 26 languages, with millions of copies of books and CDs produced. The Vihara’s Buddhist Institute Sunday Dhamma School (BISDS), founded in 1929, is the oldest Sunday School in the country and continues to produce systematic books on Buddhist studies for children.

The Wesak procession organized by the Vihara since the 1890s is the oldest and largest religious procession in the country. The Wesak month long celebrations at the Vihara attract about 100,000 people.

The Vihara too has hosted many other visiting dignitaries such as the Thai Royal Family, Cabinet Ministers and Deputy of Malaysia and overseas, Ambassadors and High Commissioners, heads of foreign missions in Malaysia, and local and overseas members of legislature and Parliament.

It is also interesting to note that Brickfields, Kuala Lumpur is tagged as the “Divine Location” of Kuala Lumpur. Many religious structures, some over 100 years old are concentrated in this area, particularly on Jalan Berhala, where the Maha Vihara is located. The aptly named road, “Berhala” translated from Bahasa Malaysia means “shrine houses”.

A sprinkling of temples, mosques, Hindu temples and churches of different denominations can be found here. (More info)

The journey from KLIA-KL Sentral is approximately 28 minutes; frequency of trains travelling is an estimation of 15 minutes.

There is an Airport Coach shuttling passengers to and back from KL Sentral.

KLIA-KL Sentral takes approximately 1 hour, frequency’s every 30minutes per schedule. They are priced at RM10 (one way) and RM18 (return).

You can book tickets online. For purchases through bus operators, the bus counters/representatives can be seen as you exit the customs and immigrations point in KLIA.

There are many bus operators who shuttle passengers to and back from KL Sentral. They are relatively cheap and frequent.

Another option is AeroBus. Tickets for AeroBus can be purchased online at http://www.aerobus.my/Home_en.aspx. AeroBus schedule can also be obtained from the website. AeroBus tickets are priced at RM8 (one way) and RM14 (return).

For purchases through bus operators, the bus counters will be on your left upon exiting the customs and immigrations point in LCCT.

Please purchase your taxi tickets at the official taxi counter on the upper level.

We recommend that you do not hail taxis at the building because they will overcharge you.

Be aware that the taxi counter is closed between 4am and 6am in the early morning.

You can also take taxis/limo that will bring you directly to Maha Vihara from KLIA/LCCT, however they could be more costly but saves you the hassle of moving around too much with your luggage. Make sure you pre-purchase your taxi tickets at the official counters within Arrival Halls.

Accommodation will be dormitory style with mattresses and basic needs. For a more comfortable stay, please bring your own sleeping bags.

Alternate accommodations are available through hotels on your own.  We recommend the following:

There are other hotels available if you were to search online. Hostelworld or Agoda are good places to start. Look for accommodation around the vicinity of Brickfields, Kuala Lumpur.

Choose a telco/pack that includes data and calls at reasonable cost. Note that there is limited Wi-Fi at Maha Vihara, hence, try not to rely on it.

Vegetarian food will be served at the Vihara.

The Maha Vihara is a no-smoking compound.

WikiTravel
Trip Advisor
Virtual Tourist
In context (from the eyes of a local): Beyond ‘touristy Malaysia’, Malaysia’s a country that has never seen a change in political power since independence in 1957. The ruling coalition (Barisan Nasional) is currently the world’s longest reigning regime. It is constituted of mainly three racially based parties – a Malay party (UMNO), a Chinese party (MCA) & an Indian party (MIC). In the recent years, civil movements are burgeoning. Some pushed for a free and fair election, some on environmental issues (world’s biggest rare earths refinery plant with radioactive waste), freedom of expression (students arrested for possessing political fliers in their car), media freedom, fundamental civil liberties (detention without trial for indefinite period of time), religious freedom, cultural preservation (against demolishing heritage sites to build shopping malls) and on.