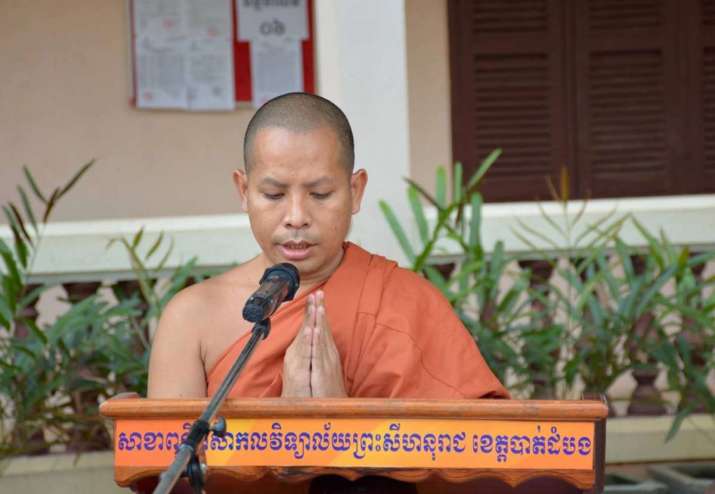 As the worst flooding in about a decade inundates large areas of Cambodia, already reeling from the economic impact of the COVID-19 pandemic, the Southeast Asian country’s Buddhist community has been at the forefront of efforts to reach out to vulnerable communities to offer relief aid and comfort to those most affected.

Cambodia has experienced heavy rains as a result of intense tropical storms since the beginning of the month. As of 21 October, some 156,137 households in 14 provinces across this Southeast Asian nation were reported to have been be impacted by flash flooding, which has also unearthed mines and other unexploded war ordnance, as well as damaging or destroying farmland and infrastructure. Buddhist monk and scholar Venerable Vy Sovechea, president of the Preah Sihanouk Raja Buddhist University, Battambang Branch (SBUBB) is one of the country’s leading socially engaged Buddhists and has been leading relief work in Cambodia at the grassroots level.

“Although our resources are limited, we have reach 61 families in the past two days and we are going to support 80 more families over the next few days,” Ven. Vy Sovechea told Buddhistdoor Global.

Battambang Province in northwestern Cambodia, the largest country’s largest rice-producing region, has been among the worst-hit areas in recent weeks, with 66,088 households affected and 4,592 residents displaced due to flash floods.

Cambodia’s National Committee for Disaster Management has reported that flooding has recently worsened in several parts of the country, due to continued heavy rains coupled with dam releases in neighboring Thailand. The flooding has so far affected in more than 483,140 people in 19 of the country’s 25 provinces, with at least 39 people dead. Some 60,000 houses have been damaged, and more than 46,216 people evacuated. In addition, the NCDM said that 232,551 hectares of rice fields and 83,918 hectares of subsidiary crops had been damaged or destroyed, along with numerous roads, bridges, and canals. More rainfall is expected.

“We delivered 20 packages of relief supplies to 20 families in cooperation with the local Catholic community, and we have also received some donations from Khmer American Buddhists in the USA,” noted Ven. Vy Sovechea, who is also a member of the International Network of Engaged Buddhists. “At the same time, we are also continuing to seek donations for SBUBB to further our work.” The damage from the floods comes as the country has been struggling to cope with the fallout from months of lockdown and restrictions in response to the COVID-19 pandemic. Although the number of confirmed infections recorded in this nation of some 14 million people has so far been minimal, the impact on the country’s fragile economy has been deep and far-reaching, affecting many vulnerable communities.

“For the past year, like other countries around the world, Cambodia has been affected by COVID-19, with more than 13,482 schools, from preschool to tertiary levels, closed temporarily since March in order to prevent the spread of the disease in the community,” Ven. Vy Sovechea explained.

“In order to reach out to people suffering from the floods, the SBUBB plans to distribute donations to flood-affected communities as follows:”

“Having seen the widespread suffering, the management team of the SBUBB has appealed to local and international donors, who were able to share their kindness and compassion through humanitarian activities such as fundraising and other social activities,” said Ven. Vy Sovechea. “As a Buddhist entity, the SBUBB has never discriminated based on race, skin color, beliefs, faith, or socio-cultural trends or biases. The SBUBB always cooperates with other faith leaders, such as the Catholic, Muslim, and other ehtnic communities in Battambang, working together for social welfare, charitable activities, education, peace-building, the environment, and climate change.”

Buddhism is the official religion of Cambodia, with 96.9 per cent of the population of 14.14 million following Theravada Buddhism, according to data for 2010 from the Washington, DC-based Pew Research Center. Islam (2 per cent), tribal animism (0.5 per cent), and Christianity (0.4 per cent) represent the bulk of the remainder. According to the Ministry of Cults and Religious Affairs, there are 59,516 Buddhist monks and 4,755 monasteries in Cambodia.